Sometime, in an effort to accomplish something in our communities, we move so quickly that we don’t even take the time to slap a label onto what we’re doing—until we come across a lovely term like “tactical urbanism” and wonder why we didn’t coin it first.

Nate Berg, writing for the Atlantic Cities website, describes the term concisely: “Guerrilla gardening. Pavement-to-parks. Open streets. These are all urban interventions of a sort—quick, often temporary, cheap projects that aim to make a small part of a city more lively or enjoyable.” And when we begin to dive into all the loveliness behind tactical urbanism, we find something that serves us well in a variety of settings: the reminder that great accomplishments don’t have to address problems and challenges at a macro level; sometimes we help change our world through small, incremental steps rooted in community, collaboration, innovation, and learning.

The learning element, for me, was obvious from the initial moment I learned about tactical urbanism (yesterday morning, while skimming a Twitter feed): a couple of training-teaching-learning colleagues—Heather Braum and Jill Hurst-Wahl—were attending a conference presentation on the topic, and both saw connections between what keynote speaker Mike Lydon was describing and what they had heard from me about the Hidden Garden Steps project here in San Francisco’s Inner Sunset District. After skimming notes prepared and posted by Jill and Heather, I immediately downloaded the wonderful Tactical Urban2 online manual produced by Lydon and his fellow tactical urbanists; devoured the descriptions of tactical urbanism projects documented within that manual; relished the idea that several of these projects are in place here in San Francisco or under consideration; thought about how they might inspire positive actions within libraries; and even began thinking about how the spirit of tactical urbanism flows through the best of learning projects I have encountered.

And yes, I immediately understood why Heather and Jill would think about a $467,000 project like the Hidden Garden Steps within the context of a philosophy rooted in “quick, often temporary, cheap projects that aim to make a small part of a city more lively or enjoyable”: the Steps, like so many of our training-teaching-learning efforts, appear to be large, complex, and daunting when seen out of context; within context, however, they are organically interwoven segments of a much larger tapestry that builds upon what is already in place and provides additional foundations for further development.

When we look at the broad brushstrokes of urban development within Lydon’s work, we immediately—if we have already encountered these volumes—think of Jane Jacob’s The Death and Life of Great American Cities (1961); Christopher Alexander’s A Pattern Language: Towns – Buildings – Construction (1977), The Timeless Way of Building (1979), and just about everything he has written since then; William Whyte’s City: Rediscovering the Center (1988); and Peter Harnik’s Urban Green: Innovative Parks for Resurgent Cities (2010). When we think beyond the explicit references to urban development, we think of how libraries increasingly engage in flexible use of their spaces for everything from community meetings addressing needs of libraries and the communities they serve to remodeling of spaces to create everything from an information commons to makerspaces. And when we stretch this even further into learning organizations, we find the sort of on-the-fly quick, often temporary, cheap experimentation some of us pursue in our communities of learning when we attempt something as simple as using Facebook or Google+ Hangouts to conduct online office hours with our learners in the hope that they will establish learning communities that last far beyond the formal end of a course we have facilitated. 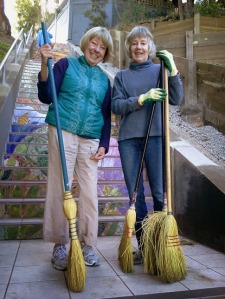 Let’s draw explicit parallels here. Lydon and his colleagues document guerilla street tactics including painting a crosswalk where one doesn’t exist, but is needed, and shows how that simple action leads city officials to acknowledge and act upon the need. Libraries can create book discussion groups that go far beyond the traditional recreational approach to that action: by organizing discussions around a book that addresses a community need, the library can be part of a collaborative effort to substantially and positively address and act upon a community need. Those of us involved in training-teaching learning—which, I believe, includes tactical urbanists who teach by example; library staff, which facilitates learning through much of what staff members offer; and those involved in workplace learning and performance—engage in the spirit of tactical urbanism by exploring easy-to-implement low-cost/no-cost innovations that, when successful, quickly spread throughout our extended learning landscapes. And those of us engaged in projects like the Hidden Garden Steps—that 148-step ceramic-tiled mosaic surrounded by gardens tended formally and informally by neighborhood volunteers—are immersed in the spirit of tactical urbanism by building upon the example of those who came before us and inspiring others to create their own versions of these magnificent community meeting places that serve a worldwide community of visitors.

The punchline remains one I frequently recite: all we have to do is dream.

Learning Social Media With Our Learners (Pt. 3 of 4): Office Hours in a Google+ Hangout

Having twice used a private Facebook group as the platform for virtual office hours over the past couple of weeks, participants in the latest version of the four-week online “Social Media Basics” course I developed with colleagues at ALA Editions went for broke this morning: we used a Google+ Hangout for our latest office hour.

While it was far from perfect, it proved to be a spectacular learning experience for those who wanted the opportunity to create another learning sandbox in a course that has promoted experimentation as a way of becoming comfortable with a few of the numerous social media tools available to us.

The experiment—not originally built into the course, but completely in character with the approach we’ve been taking together—was inspired during our second Facebook office hour last week. We had begun discussing how different people were using Google+ Hangouts creatively, and I responded to a question by describing how Samantha Adams Becker (from the New Media Consortium) and I had used Hangouts as the vehicle for blended cross-country presentations on technology in learning. (I was onsite in the San Francisco Bay Area with American Society for Training & Development—ASTD–colleagues, and Samantha came in from her home in New Orleans via the Hangouts.) I also led the virtual office hour participants to the YouTube video of John Butterill’s Virtual Photo Walks via Google+ Hangouts. It was at that moment that one of the participants expressed an interest in conducting our next virtual office hour via a Hangout, and the request picked up momentum through the learners’ own actions.

When I saw that one of the course participants was running with the idea of connecting with a few other learners via a Hangout—an option suggested as a final course activity—I contacted her to ask whether she would like to combine that effort with the proposed office hour and actually facilitate the session herself. She immediately accepted, sent out the invitations both on Google+ and in the class forum (in Moodle), and began preparing for the session. Although I was there to support her during the brief planning stages and while the Hangout was in progress, it really was a learner-driven session with all the ups and downs we expected through that effort.

She and I worked together in advance to craft a rough outline of how the session would proceed, and agreed that part of the success would come from not overly structuring the conversation. She and others exchanged information ahead of time via Google+ and the class forum. She even set up a pre-session sandbox for anyone who wanted to play with the technology before the office hour officially began.

When we logged on at the appointed time, she and the others were fantastic in addressing challenges. The initial Hangout was a bit slow, and screens froze a couple of times, so we decided that she should log out and then come right back in to see if the connection would stabilize. Although the rest of us were able to continue in that original Hangout, she somehow found herself locked out of it, so immediately contacted me, via a separate chat, to see if the entire group could move into a new Hangout. The transition was relatively quick, and we were all in the new, much more successful Hangout, within 10 minutes of the original start time—a great learning experience for those interested in seeing how easy it could be to resolve problems within a new learning environment like a Google+ Hangout.

As was the case with our initial Facebook virtual office hour, we spent another few minutes playing around with the technical side of the event since this was meant to be a learning experience, not a professionally-produced program: helping participants unmute their microphones, establishing an understanding of how to effectively use the chat function, and even finding a way to allow one struggling participant to view the session through a live feed via YouTube. By the time we were a quarter of the way through our hour-long session, we had moved away from discussions of how to operate within a Hangout and were already discussing topics germane to the work we were doing in “Social Media Basics.”

None of us expects to win any awards for production values or content from that first experiment, but we all walked away with something far more important: the memory of an engaging online session that made everyone feel as if we had finally “met” in the course because we had that virtual face-to-face experience, and lots of ideas about how the experience could quickly be replicated in our own workspaces to the benefit of those we serve.

And if that isn’t at the heart of successful learning in our onsite-online world, then I’m not quite sure what is.

N.B.: Heartfelt thanks to the staff of the New Media Consortium for introducing me to John Butterill’s Virtual Photo Walks through the work Advisory Board members did on the 2013 Horizon Report Higher Education Edition.