Changing the World With Maurice Coleman (Part 2 of 2)

This is the second part of a two-part interview conducted with Maurice Coleman, Creator/Executive Producer/Host for the long-running T is for Training biweekly podcast, for my book Change the World Using Social Media (Rowman & Littlefield; to be published in 2019). The interview was conducted online using a shared Google Doc, and has been lightly edited. 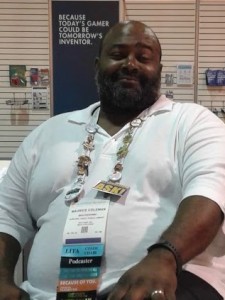 You clearly have strong, positive thoughts about the state of training-teaching-learning-doing in libraries. How does your continual fostering of the community of learning at the heart of T is for Training pay off for you and those you serve in your own library, community, and larger community of learning that extends through the American Library Association, Library Information & Technology Association division, and other parts of your learning environment?

Because of the show and conversations related to it, I am better at my job than I would be without it. The show is my training, continuing education, and master class. I know more about various aspects of my profession than sometimes I want to remember that I know. Also, I can bounce new ideas or steal great ones from the folks who appear on the show. In fact, just today, someone was looking at my office door where I have the “future literacies” graphic [from Jonathan Nalder’s FutureWe project] affixed and thought it an interesting concept. I would have been able to sort of explain the concept about various skills needed in the future, but just the graphic and conversation with our friend in Australia [Nalder] was insightful and incredible and that would not have happened without the T is for Training network in general and Paul Signorelli in particular.

What a wonderful expression of the global nature of the community you’ve fostered through T is for Training—and how the collaborative nature of that community connects a project like Jonathan’s with what you are doing here in the United States.

Let’s shift gears and go under the hood a bit for the benefit of those who don’t know how to start. What led to your decision to use TalkShoe as the platform for the podcast?

Because the show that inspired T is for Training, Uncontrolled Vocabulary, used it and it allowed folks to participate without using a computer—with just a phone call. Now is it way easier to participate on the show in front of a computer? Yes—but I have had folks just call from their car and still be able to actively participate in the show, which is a bonus. Also, it does all of the recording generating work and all of the work sending it to iTunes in the background, so I don’t have to worry about it. At this point, I am too lazy to move, unless there was—knock wood—some catastrophe at TalkShoe—then I would be hosed. I should probably download all the episodes……Hmm….[editor’s note: the hypothetical catastrophe actually occurred shortly after this interview was completed in spring 2018; T is for Training episodes recorded before 2015 disappeared from the TalkShoe server.]

Yes, please; was just going to ask about your current back-up for the archives, but already see the answer.

On a related topic (in terms of setting up): what would you recommend in terms of equipment and setting for the recordings of a podcast?

I record live episodes via a phone connection, so if you can, use a headset. It is way more comfortable than holding a phone up to your head for an hour. That goes even for a non-cell call.  Try to find someplace with few disturbances to set up to start the show. If you use TalkShoe or some other similar service, you may or may not have an open chat to monitor, and will need to have a computer set up to do so.

When I do that method of recording for future use, I use a computer with Audacity to capture and edit the sound recording, and use a microphone, by the Blue corporation, called a Snowball. You can also use the Blue Yeti. They are both good microphones for around 100 or so dollars and plug directly into your computer to create your recording. I know other podcasters use Apple-based products to record and edit their podcasts. I encourage you out there to ask your favorite podcaster, “Hey, what do you use to record your show?” and they can tell you their set-up.

Any other advice for anyone considering the use of podcasting to help foster positive social change?

Be honest, real. Start small and start with what you have—most importantly, your good friends and colleagues. Don’t be afraid to ask for help and hang on for the ride.

N.B. — Paul is currently writing Change the World Using Social Media, scheduled for publication by Rowman & Littlefield in 2020. This is the seventeenth in a continuing series of excerpts from and interviews for the manuscript in progress.

Changing the World With Maurice Coleman (Part 1 of 2)

This is the first part of a two-part interview conducted with Maurice Coleman, Creator/Executive Producer/Host for the long-running T is for Training biweekly podcast, for my book Change the World Using Social Media (Rowman & Littlefield; to be published in 2019). The interview was conducted online using a shared Google Doc, and has been lightly edited. 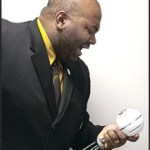 What would you suggest to anyone who is just beginning to look at podcasting as a way of helping foster positive social change?

The usual.  Be yourself.  Be honest.  And though it may sound trite, be real. You may have to do some self-promotion in order to reach a larger audience. Also, don’t be surprised if your work reaches further than you can imagine.

What initially motivated you to move into podcasting?

I wanted to replicate the vibe and comradery I felt at conferences where I was surrounded with brilliant members of my “tribe” of trainers, computer folks and other gear/nerd/cool folk heads. I wanted that all of the time—not just a couple of times of the year if I was lucky, so, I took from a friend’s podcast and said, “Why not me?” That was 2008, and we have been going strong ever since.

When I went back to listen to the earliest episodes, I left with the feeling that everyone was just sort of wondering how to proceed and whether it would actually work. How long did it take for things to click for you and those you reach through T is for Training?

I think it was the Christmas/year-end episode when Guest Host Emeritus Stephanie Zimmerman sang the T is for Training song. That is the “well, damn” moment. Also, people kept coming back to the show. Then someone nominated me for a Library Journal “Mover and Shaker” award in 2010, and that was additional validation that I knew what the heck I was doing—though I didn’t really need the validation, because I did the show for my personal benefit and anything else was gravy. Awesome gravy, but gravy still. I was also lucky to have the support of my library—and, specifically, my boss and director at the time—to do this during work hours. We believe in professional development, and my podcast continues to be a great source of my professional development.

When we were together recently, you said “People don’t start out wanting to change the world. They usually start out wanting to change this…this one situation.” Is there an identifiable moment when you went from doing the show for your personal benefit to doing it because you realized it was having a positive change on the face of training-teaching-learning-doing in the industry you serve?

Maybe personal benefit is the wrong phrasing, but it is close enough. I always feel a responsibility for keeping this ship going, and it was always both personal benefit and for the benefit of others. When I did the first show, I asked them by email if this was worth their time.  They all said yes and also came back, so, from the beginning, I knew that others wanted someplace where they could be amongst colleagues on a regular basis who shared their struggles and triumphs and knowledge around training and learning. Back then, trainers in libraries were this either weirdly-placed position in either HR [Human Resources] or IT [Information Technology], or it was someone’s second job in the system. And you were usually the only one. So, if you wanted to bounce ideas off of someone, you had to reach out outside of your system to find someone who knew your specific job stuff.  T is for Training provided and still provides that forum—I hope. Honestly, every week, I am surprised folks come back.

As one of your “usual suspects,” I see T is for Training in many ways: a podcast, a forum, a community of learners/community of learning, a virtual water cooler, a lab where ideas take shape and spread. Can you think of an example of a situation where something that happened on the podcast transformed, in a positive way, those involved in the recording to someone who listened to an archived recording?

Good lord. Maybe I think of the discussion we had yeaaaaars ago about libraries as more than book archives. We talked about the various places and the library as fourth place [libraries as social learning centers]. Did the Computers in Libraries conference presentation about it. And, about the same time, that became the prevalent library design and management thought—to provide those services thinking of the library as a community center providing rich life experience outside of traditional book-/author- based stuff.

While I am sure others can think of other things, that is what sticks out in my mind. I am somewhat oblivious to that larger ripple effect, and always hope the podcast did, can, and will help folks make their situation—no matter how they define situation—better for them, their family, their library, and their community.

As you know, I’ve been exploring and been fascinated for years by the idea that our way of carrying on conversations has changed out from under us as a result of how conversations extend across great periods of time and across multiple platforms. An example: we talk about something on T is for Training (e.g., libraries as a newly-defined fourth place), then continue that on Twitter or Facebook, months later face to face, and months or years later in a typed-chat conversation like this. How does that affect the work activists attempt to do by incorporating social media tools into their overall social-media toolkit?

Use anything and everything you have the energy and time to use. Always remember that the conversation is ongoing even if you are not directly participating in what it is now. Also, do that interview, share that story, wherever and whenever you can. Always stick to your talking points if you are doing an interview. Always pull the question back to why you are there or reject the premise of the question itself and bring it back to your needs. Use [social] media as your tool to get your message out to folks, not be used as a fad or a media sock-puppet.

Also, you don’t have to do it all yourself. You have friends and colleagues and acquaintances. Ask them to help. A message said many times, from many sources, is usually heard.

N.B. — Paul is currently writing Change the World Using Social Media, scheduled for publication by Rowman & Littlefield in 2020. This is the sixteenth in a continuing series of excerpts from and interviews for the manuscript in progress.