Although I did not, last Saturday, expect to find myself joining others in singing “Deck the Halls” at a memorial service, I also didn’t expect to be saying good-bye to Patricia Vanderlaan Post so soon—she died of heart failure on January 1, just a few weeks before her 62nd birthday.

Patricia—Pat or Patti to those of us who knew her—was one of those wonderful people who are so deeply immersed in our communities that we hardly notice how much they are doing until they are no longer there doing it. Others at that memorial service last weekend recalled how Pat volunteered at her daughter’s school, or opened her home to a student from Kosovo for six years, or was an active member of The Gratitude Center community. We heard about how she “took delight in children of all ages, and worked to promote their welfare and education,” how she “was an ardent supporter of empowerment for women and social justice” and once told her stepdaughter that she would buy her any CDs she wanted—as long as those CDs featured women musicians to augment a CD collection mainly comprised of music by men.

She quickly won my gratitude and admiration when, after joining the Hidden Garden Steps organizing committee to complete that project that placed a second ceramic-tile mosaic staircase and gardens here in San Francisco’s Inner Sunset District, she offered to do anything that would help move the project toward fruition. She wasn’t looking for anything glamorous; she just wanted to help where help was needed most. When she asked how she could be most useful, I provided an embarrassingly honest answer: we needed someone to sit with me for an hour or two to complete the application for permits needed before installation of the mosaic could take place on City and County of San Francisco property. I knew that if I didn’t have someone to work alongside me, I would continue procrastinating about completing that simple task.

It wasn’t that the paperwork was daunting, and it wasn’t that deadlines were looming before us. The real issue was that other committee members were too immersed in the short-term challenges and deadlines to spend time on preparing permit paperwork for an installation that was still at least 12 to 18 months away; the fact that the application process could take anywhere from six months to a year from submission to approval just wasn’t a compelling issue for most of us to address.

But Pat saw it. She got it. And, most importantly, she immediately set a specific time and day to sit with me so we could complete that fairly simple application and compile all the supporting documentation needed to start the application process. While others saw it as a distraction and as something that had no urgency, Pat and I completed everything in one afternoon, and I submitted the package to our City/County liaison a few days later, in November 2012. And when final approval was finally granted by our County Supervisors in October 2013—nearly a year later, and less than 48 hours before the installation was scheduled to begin—I couldn’t find enough words of praise to offer Pat for the underappreciated role she played in assuring that the mosaic went onto those concrete steps rather than having to sit in storage all winter and spring until we could be assured of having weather good enough to complete the installation process in 2014. 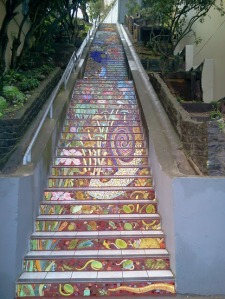 Those of us involved in the project saw Pat at other times. She was there to help with public workshops that allowed Steps supporters to create small parts of the mosaic under the direction of project artists Aileen Barr and Colette Crutcher. She joined others in laying background tile onto some of the Steps risers during those workshops. And my wife and I ran into her and her husband—Marty—a few times while all of us were taking walks along one of the small lakes in Golden Gate Park at dusk; we would stop, chat about the Steps and other things we were all doing, and look forward to the day when we would be celebrating a collaborative community success on the completed Steps themselves.

We never had the chance to have that onsite Steps celebration together. By the time we had our opening ceremony, in December 2013, Pat wasn’t well enough to join us. I did, on the other hand, feel as if the decision to celebrate her life and her spirit by singing “Deck the Halls” at her memorial last weekend made perfect sense after her husband explained that it was her daughter’s choice—in honor of Pat’s habit of singing her children to sleep throughout the year with “Deck the Halls” rather than something more mundane. After all, “mundane” is not a word to be connected to someone who so gracefully, charitably, and diligently worked to make her community a far better place than it would have been without her.