The Hidden Garden Steps ceramic-tile mosaic created and completed by project artists Aileen Barr and Colette Crutcher is in place here in San Francisco, and an ever-expanding community has quickly claimed the site as its own—just as organizing committee members hoped it would.

The Steps as venue for exercise

New resources connecting that community are appearing online with increasing frequency. We have seen our existing website, Facebook page, and Twitter account (all created and maintained by project volunteers) augmented through individual initiatives by those who are falling in love with the Hidden Garden Steps (on 16th Avenue, between Kirkham and Lawton streets in San Francisco’s Inner Sunset District): There are already reviews on Yelp, check-ins on Foursquare (including our first official Hidden Garden Steps Foursquare mayor), favorable mentions in the San Francisco Examiner and on Weekend Sherpa, and wonderful articles on Cindy Casey’s “Art and Architecture – San Francisco” blog and Tony Holiday’s San Francisco park trails and public stairways blog.

A two-fold agenda was always at the heart of the four-year effort to transform the overgrown, ill-tended, graffiti-marred 148-step concrete staircase (originally constructed in 1926) into a neighborhood gem: creating a second ceramic-tiled staircase with community gardens to complement the original steps on Moraga Street, between 15th and 16th avenues, and creating an outdoor variation on the indoor Third Place concept promoted by  Ray Oldenburg in The Great Good Place: Cafés, Coffee Shops, Bookstores, Bars, Hair Salons and Other Hangouts at the Heart of a Community (1989).

The formal opening ceremony on Saturday, December 7, 2013 provided plenty of signs that both goals were being met. Sherry Boschert, a Hidden Garden Steps supporter who remains active in a variety of neighborhood initiatives, worked with Steps organizing committee members to organize and orchestrate a community-based volunteer-driven block party that attracted more than 150 participants. Among those speaking at the event were San Francisco County Supervisor Norman Yee (also serving as acting mayor that day); San Francisco Department of Public Works Community Liaison Jerad Weiner, who remains a conduit of onsite support through the San Francisco Department of Public Works Street Parks Program; DPW structural engineer Ray Lui; San Francisco Parks Alliance Executive Director Matt O’Grady, offering support as head of our fiscal agent; and the artists themselves.

Every one of those brief from-the-heart presentations acknowledged the number of partnerships, donors, and community volunteers needed to produce something of that magnitude, and Supervisor Yee’s own presentation captured the spirit of the endeavor—rather than placing himself at the center of the event, he very generously spent time  acknowledging that he was elected to represent the district as the project was nearing completion and that it was the work of his predecessor (former District 7 County Supervisor Sean Elsbernd) and predecessor’s staff that contributed tremendously to the success of the Steps initiative. 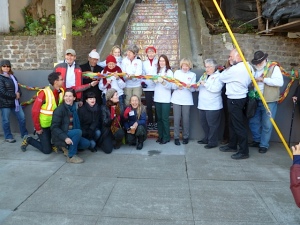 Ribbon-cutting at the Opening Ceremony

Organizing committee members had one intentionally brief, wonderfully playful moment in the limelight as we were surrounded by many of our project partners to cut a multi-colored crepe-paper-weave ribbon stretched across the foot of the Steps. We then literally and figuratively stepped aside as dozens of people streamed up the Steps to transform the site from a project facilitated by a core group of community volunteers to one claimed by the larger community that supports it.

By late afternoon, the crowds had dispersed. A sense of tranquility was once again palpable on site. And by mid-evening, the Steps were continuing to quickly evolve into a meeting place for friends as well as for neighbors and complete strangers who otherwise might not be seeing, talking, and dreaming with each other. As I was taking a final look down the Steps just before 10 o’clock that evening, I ended up talking with someone who hadn’t realized the Steps were already completed and open to the public. We chatted about how the project had developed, talked about how he wished he had been available to more actively support and be an active participant in the development and implementation of the project, and talked about other neighborhood projects in development—which made me realize that less than 10 hours after the Steps opened, they were already functioning as an outdoors Third Place that draws people together and creates the possibility of additional collaborations.

Those encounters have continued on a daily basis since that initial day. Several organizing committee members and other neighbors all found ourselves engaged in a wonderful impromptu conversation on the Steps on New Year’s Day. Visitors from San Francisco’s East and South Bay areas have repeatedly come to the Steps and brought friends. Those who supported the project through the purchase of individual tiles interwoven into the completed mosaic with personal inscriptions come, photograph, and bring friends to enjoy the beauty of the site and the spectacular views it provides. Project volunteers continue to participate in the monthly two-hour clean-up and gardening sessions held on the second Saturday of each month from 1 – 3 pm (open to any interested new or returning volunteer), and neighbors, without any formal guidance or call to action, simply show up when they see that the Steps need to be swept or in some other way spruced up a bit to keep the site pristine.

Most importantly of all, the spirit of community and collaboration that drove the Hidden Garden Steps to completion is already inspiring a neighbor—Al Magary—to see if he can informally organize a group to sweep and take other actions to clean up the long-ignored even larger set of steps one block away (on 15th Avenue, between Kirkham and Lawton streets). Anyone interested in joining that budding community of interest can contact Al for more information at 15thAveStepsPark@gmail.com. Who knows? Perhaps a third set of ceramic-tiled steps is on its way.

N.B.: This is the twenty-third in an ongoing series of articles to document the Hidden Garden Steps project in San Francisco.