ALA Midwinter 2018 (Denver): Conversations, Ghosts, and Pentimenti in the Hallways

The halls of the Colorado Convention Center in Denver, where the American Library Association (ALA) 2018 Midwinter Meeting is fully underway, have never felt more lively or filled with stimulating, deeply thoughtful conversations to me. Nor have they ever felt so filled by ghosts.

I have, frankly, lost track of the number of times I have been here for ALA and ATD (Association for Talent Development) conferences. And, as I walked the conference center hallways yesterday morning—only yesterday; already feels like weeks ago—for my first onsite activity during the 2018 Midwinter Meeting, I felt worlds melting into each other. Intellectually, I knew I was here to spend time with my trainer-teacher-learner-doer colleagues working in the library industry. But somehow my body was instinctively reconnecting me viscerally with friends and colleagues I met during previous visits, as if their ghosts—conference-center pentimenti or some other form of presence—remained long after they had returned home. I found myself thinking about attending sessions scheduled for other (previous) conferences as if they were still about to happen.

Repeatedly then and now—nearly a day and a half  later—I found and find myself looking for and expecting to see friends (some still alive, some now long-gone) encountered during previous ATD and ALA conferences. And it was—and is—comforting and reassuring because it reminds me that the wonderful, ongoing ALA conference slogan—“the conversation starts here…”—only captures part of the overall experience of participating in any well-organized conference.

Conversations both start and continue here, in the sort of extended moment I have explored numerous times in blog posts and conversations. And here, in our wonderfully blended onsite-online world, is far more than the physical conference center spaces. Here is the rooms, the hallways, the simple yet masterfully organized spaces including the Networking Uncommons—where you can stop in anytime the conference is underway, grab a table, recharge your laptop and mobile devices, and with planning aforethought as well as magic of the unplanned moment, see exactly the right person at the right time to talk and dream and plan in ways that produce results you (all) would not have otherwise produced. And, equally importantly, here is the online spaces we create through Twitter backchannels, Facebook, Google Hangouts, and numerous other tools we use to reach out to our #ALALeftBehind colleagues who, in a very real sense, need no longer feel left behind—if they care to join us virtually. 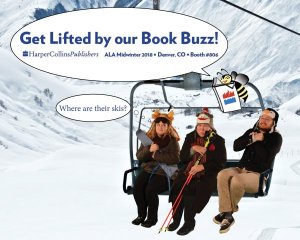 When I’ve been “left behind,” I’ve experimented successfully with ways to virtually join my onsite colleagues—to the point that I’ve received tweets asking me if I’m actually onsite. So when I am lucky enough to be onsite, I work with others to actively reach out to offsite colleagues. And, again, it works. While attending a wonderful 90-minute “Adult Book Buzz” talk sponsored by HarperCollins Publishers this morning, I tweeted out a few quotes and a few links so those who following the #ALALeftBehind hashtag so they would have glimpses of what was occurring onsite—and I saw the reach of those tweets extended through retweets.

The event itself was masterfully facilitated by our HarperCollins hosts (Library Marketing Director Virginia Stanley, Marketing Associate Christopher Connolly, and Marketing Assistant Lainey Mays): as they were describing a wonderfully rich list of upcoming novels and nonfiction works from their authors, they occasionally brought those offsite authors onsite by showing brief, engaging, videos from authors who had taped greetings to us and brief descriptions of their works that are about to be published. (And it worked! Christopher Moore’s brief, very funny introduction to his upcoming novel Noir sent me over to the HarperCollins booth in the conference exhibits area late in the day to pick up an advance reader’s edition of the books so I don’t have to wait until April—when it’s scheduled to hit the bookstores and our libraries—to read it.) It gets better: our “left behind” colleagues will, a few days after I post this blog piece, be able to virtually attend the session by viewing a recording of it on a new site HarperCollins is about to launch. (I’ll update this article by adding a link to the recording as soon as it is available.)

We really are in what feels to be the early stages of an entire change in the way we meet, communicate, and engage with each other. What I have joking referred to as those “ghosts” in the hallway are actually quite real; when I want to viscerally and virtually re-engage with them, I can go back to pieces I’ve written about our conversations, reread those pieces, incorporate them into later pieces (like this one), and extend the elastic moment of conversation further by adding to it with additional tweets, Facebook postings, Google Hangouts, something as simple as a newly-initiated phone call from the conference center, or a follow-up face-to-face conversation next time we’re actually in this (or another) conference center together. (I actually did attempt to draw in a colleague who is missing the annual Midwinter Meeting for the first time since we began attending them together—the spontaneous attempt to create a Google Hangout with her so I could “walk” the aisles of the exhibits area when it first opened last night was not successful—and we actually chatted by phone for a few minutes to I could teasingly describe all the things she was—not quite—seeing. But when you and I think about those failed and successful attempts, we realize that the concept of being “left behind” is only as large and insurmountable as we and our imaginations allow it to be.

So, I write this piece in honor of all the colleagues I have seen, am seeing, and will ever see when we are “together” at the ALA Midwinter Meeting or Annual (summer) Conference), the ATD International Conference & Exposition, and other professional-family gatherings. I hope it inspires you to reach out via Twitter, Facebook, phone, or any other available means when you are here and others aren’t. And I hope it inspires you to reach out in those same and other ways when you are offsite—and ready to be onsite as quickly as your virtual modes of transportation can get you here. Let’s give those “ghosts” the attention and support they need; the rewards to every member of our communities and to the communities themselves are virtually limitless.