While R. David Lankes’s “New Librarianship Master Class”—a massive open online course (MOOC) under the auspices of the University of Syracuse School of Information Studies from July 8 – August 4, 2013—focuses on librarianship and the staff who make libraries what they are, we really can’t dive into that rich field of study without first looking at the public and civic nature of libraries (and other spaces)—a theme Lankes addresses in his book The Atlas of New Librarianship.

As is the case with much of what Lankes provides in the book and in the course, new librarianship reaches far beyond those working in or for libraries. Often focusing on the training-teaching-learning roles that librarians and libraries have long assumed, the course and book are a rich source of exploration for anyone involved in facilitating the learning process for learners of any age. And in a particularly fascinating passage, Lankes also steps back long enough to explore what he perceives to be the difference between “public” and “civic” spaces—a theme of interest to anyone who cares about and becomes involved in community development, collaboration, and partnerships (within or outside of libraries and librarianship).

“A public space is not truly owned. It is an open space,” Lankes writes (p. 65). “A civic space [e.g., a library], on the other hand, is a regulated space on behalf of the public. That means it is beholden to a whole raft of policy and law. A group can gather in a public space. They have to have permission to do so in a civic space, and that permission must be given in an equitable and nondiscriminatory way.”

While the distinction that Lankes offers provides plenty of room for exploration, it also addresses an almost vanished concept in a world where nearly every space is civic in the sense that it is under observation by citizens via cell phones and video cameras as well as by outright government surveillance and regulation, as is obvious to anyone thinking about how regulated public gatherings are at events ranging from national political party conventions to barbecues in public parks. Even our city, regional, state, and national parks are more “civic” than “public” under this definition when we think about how tightly regulated they are: they are treated almost as if they are living museums, where artifacts are meant to be preserved and where we are discouraged (for good reason) from removing plant specimens or even picking and eating wild berries, and permits are needed for overnight camping so that they have moved beyond that “public” unregulated state of existence. 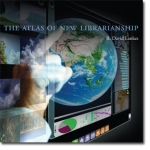 And yet there is far-reaching value in considering what Lankes says of libraries as civic rather than public spaces, for it carries over into so many other aspects of daily life that includes, but goes far beyond, what libraries, librarianship, and librarians (as well as other members of library staff) provide and inspire within communities: the aforementioned development of community, the fostering of collaboration, and the creation and nurturing of partnerships that produce far more as “civic” efforts than could ever be accomplished without the organized efforts that accompany the best of civic endeavors.

Lankes and those of us taking the New Librarianship Master Class are engaged in discussions about that precise library/librarianship topic at one significant and obvious level, but engagement at that level need not restrain us from taking the larger view of civic engagement that accompanies our collaborative explorations. When we become involved in projects along the lines of the volunteer-driven community-based Hidden Garden Steps project in San Francisco’s Inner Sunset District—an effort to transform a public space into a civic space through the creation and installation of a 148-step ceramic-tile mosaic, public gardens, and murals—we agree to work with all the various partners who are stakeholders in that space: neighbors; existing nonprofit organizations; local government employees and elected officials; and numerous others whose interests have already moved that public space into the civic realm.

Community organizers struggle together—just as librarians and other members of library staff struggle—to define community/civic needs and goals; to work together to bring these evolving dreams to fruition; to create moments of acknowledgement and celebration to mark whatever successes we have; and to recognize that civic development is never a one-time start-to-finish endeavor. There is always something new to consider, something new upon which we can seek areas of agreement and coordinated action; and something we can nurture in response to changing circumstances.

That’s the beauty of what all of us do as we attempt to define what is public and what is civic; what libraries are and should be becoming; and what librarianship must include to be successful in meeting the needs of the ever-expanding onsite-online communities it serves. If we think about, respond to, and act upon these ideas of public and civic spaces, and seek the most inclusive group of partners we can identify and attract, our public spaces—libraries included—will continue to serve as civic spaces that reflect our highest aspirations.

N.B.: This is the first in a series of posts inspired by the New Librarianship MOOC.

This entry was posted on Monday, July 22nd, 2013 at 6:33 pm and is filed under libraries, new librarianship mooc. You can follow any responses to this entry through the RSS 2.0 feed. You can leave a response, or trackback from your own site.